So Jekyll Con is coming up fast.  It is set to take place on Jekyll Island, GA on December 9th and 10th.  I'm driving up with my buddy Sanjay on the day before and am splitting the room with some other friends I met at Crucible 6.5 from Tampa.

The point total is 2250 and while there aren't many points from soft scores (i.e. painting and sportsmanship), I'm still taking a fully painted army with a re-purposed display board.  Of course the goal is to not be an asshole either.  :)


The list is very elite and for such a n00b, it means I will be most likely out-deployed in most games (especially when facing more hoard-ey lists like Goblins).  Still, the speed of the list itself also gives me a lot of capability to redeploy as needed.  There are three main battle groups I want to set up.

This group is meant to be my anvil, though it has been pointed out that they can easily be the hammer with the number of attacks, Crushing Strength, and Thunderous Charge.  It consists of my 2 Brute squads (1 of which has Elite and 1 of which has the Brew of Healing) and my 2 Shaman with heal and bane-chant (1 of which has the Banner of the Griffin and 1 with the Amulet of the Fire-heart). 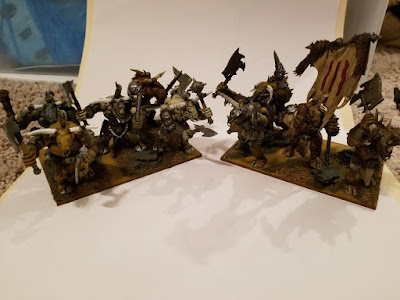 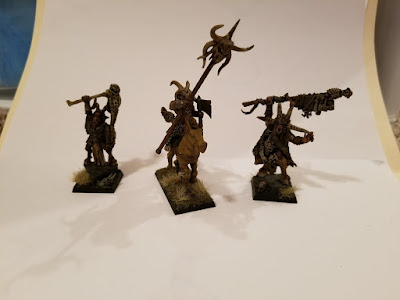 They anchor the center of the board and with no Pathfinder on the Guardian Brutes, I try to avoid trees and other terrain as often as possible.  I was originally torn between Brew of Courage and Blessing of the Gods...but I found that I had the points for Blessing of the Gods and it helps them grind things out a bit more when needed.  The 5 points for Healing is just too good to pass up!

This group is meant to be a hammer of sorts.  The interesting thing is that I don't necessarily deploy them all together as I can try to set up 2 flanks on each side of my anvil.  Though I did find that in one game deploying two of the units separately didn't give me the proper support.  This consists of my two Stampedes (Brew of Sharpness for +1 to Hit and Brew of Haste for +1 speed), my mounted totem bearer (BSB) with the Boomstick, and at least 2 of my Beast Packs. 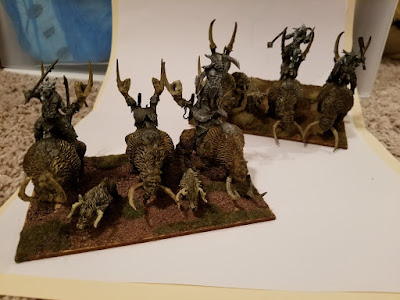 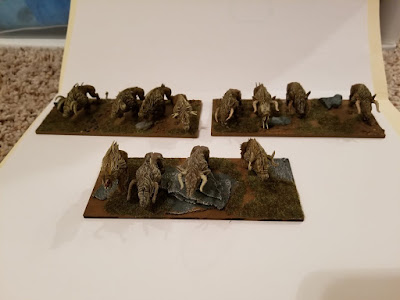 So I say that 2 of the beast packs have to go here because one has to basically accompany each of the two Stampedes.  The BSB was put on a mount to help me keep up with the speed of these guys.  The Boomstick is there to give me a way of potentially eliminate chaff or force a nerve check late-game.  He's never worth charging or targeting and in a worst-case scenario, he lets me try to charge block or redirect (only somewhat successfully as he is an individual).

As the title implies, these are the remaining dudes that I can place where ever.  They go and either support the anvil or the hammer.  They can also stay behind and help me keep something on an objective on my side of the table.  This group consists of my Regiment of Lycans (Helm of the Ram), Horde of Lycans (Brew of Strength), the remaining Beast Pack, and 2x Troops of Tribal Hunters with Bows (Fire Oil on one for points). 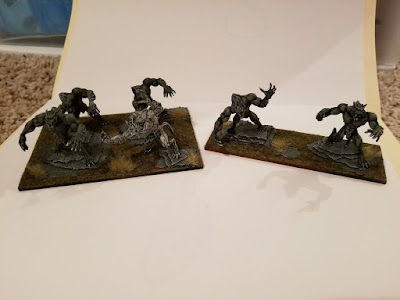 Regiment and Horde of Lycans 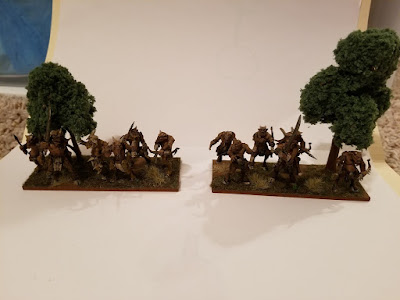 So in general, I either deploy one Beast Pack behind my Guardian Brutes to rush out and set up charge redirects...or I deploy one of each of the Tribal Hunter troops on either side and Vanguard them up into cover.  I have no issues losing these guys but normally I find that they can put a wound or two on something as it advances and it lets me at least keep objectives on my side of the field.  In one game I managed to get quite a few Flank and Rear charges...and while they only hit on 5+, they do get 16 and 24 attacks on the Flank and Reach charges, respectively.

The real money maker here are the Lycans.  In just about every game I tend to deploy them alongside my Stampede as it lets me protect their flank and erase mistakes when I push up too aggressively.  The Horde of Lycans love to get flanks and in general can reliably put anywhere from 8-9 wounds consistently on a unit.  The smaller Regiment of Lycans can also do damage but again are meant to give me some more capability of shenanigans.  I originally kept going back and forth between Blood of the Old Kin and the Helm of the Ram, but felt the latter was a good way to get an extra +1 strength on the charge and because they have Pathfinder, it is a better chance they will actually get it on the charge.

The army has speed.  The army has durability.  I have 14 drops and at least somewhat decent nerve.  The defense values leave a lot to be desired, but they work well in a pinch!

I guess that is my list!  I sometimes have delusions of winning multiple games.  I have definitely improved a lot since my games at Crucible, but have a far way to go before I am really ready to be competitive.  This list lacks meaningful shooting but again I think I make up for it with speed and mobility due to pathfinder.

Jekyll Con, here I come!
Posted by HeriGonz at 7:52 PM No comments: